Hi everyone! As we told in previous updates, we began radio tracking with amphibians at the same time we continue with our usual work.
It is difficult to detect the same individuals of amphibians every night: as they are small and cautious animals, the only way to infer their diary movement is using expensive tracking methods. Several of them are not able for amphibians, due to their aquatic and subterranean habits. Thus, we selected radio tracking, an expensive method that can be useful for these species, despite sizes and weights of transmitters must agree with the species we are dealing with. This diminish the potential of transmitters and the battery period, that in the case of our transmitters does not exceed 20 days.
Anyway, first of all we captured seven frogs in pond 1 and seven frogs in pond 2. Then we placed transmitters in the hip of frogs, similar to a belt. We assured certain width (we also prove frog movements with the belt to be sure transmitters do not damage animals). Then frogs were released in the same pond.
The following nights have been incredible! we have been capable to detect individuals each night. We are taking information interesting as for example, exact locations or habitat choice.
We will tell you more! See you! 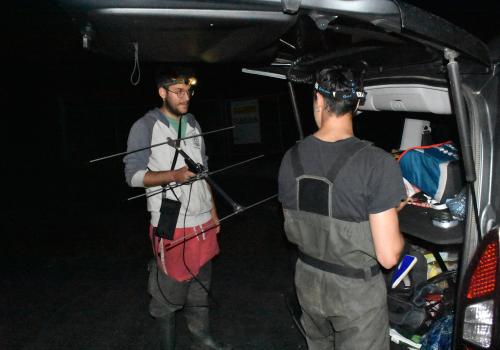